Skip to primary navigation Skip to content Skip to footer

SARAH ANNE YANCE IS THE FOUNDER, OWNER, AND OPERATOR AT TITAN POWER RENTALS IN ORACLE, ARIZONA

Operating an Adventure Outfitter location wasn’t in Sarah Yancey’s plans when she first moved to Arizona from Oregon. With a background in real estate, her goal was to rent out her three-bedroom guest house on Airbnb.

Her property was right next to a big Arizona wilderness, and guests of her Airbnb began asking if she offered any off-road rentals.

“People were inquiring about having a buggy or something because we’re right there. So I did a little business plan, and I bought one. I built a website, and it just blew up, and I had to buy two more units. So I had three. And then I was just booked out all the time.

And it wasn’t just from Airbnb. It was from the metros, like Phoenix and Tucson. But it got too big for that location. So that’s where I found [this location] in Oracle. We have thousands of miles of trail right from our location.”

Those thousands of miles of trail span some impressive Arizona scenery. Titan Power Rentals is only a half-hour from Tucson and an hour and a half from Phoenix. The Coronado National Forest is right outside the door. Less than 40 miles in one of Sarah’s RZRs or GENERALs, or the perfect option for a day-long adventure, brings you to the town of Summerhaven atop Mount Lemmon, over 9000 ft in elevation.

“You get to see the drastic change [in scenery] that Arizona offers that most people don’t even know exists.” Other routes accessible from her location are extremely popular for offroad enthusiasts, including the Tucson Wash, the Smelter Wash, and Copper Creek and the ghost town there.

“When we’re not working, we try to go out and map more trails.  We have trails for easy, medium – and then for our frequent riders, we have more advanced trails.

But we don’t allow anyone to go on the extreme trails because we don’t want accidents. Our soil doesn’t absorb water. We don’t get much of it. So if you get a monsoon, it’s just a downpour, and it just floods and washes. If we have a fire first and then a monsoon, forget about the trail. It could be a deep canyon now, and you won’t know it until you get there.”

Sarah knows her stuff. Though running an Adventure Outfitter location may not have originally been in her plans, offroading has been part of her life since she was a toddler.

“My dad was very adventurous, and he operated a small ranch. He always had a fishing pole and this old flatbed Ford truck that could go anywhere. And he would just all of a sudden be like, ‘I’ve got a wild hair!’ and he’d just go off-road, throw it in four, and we would go so fast.

I was only like two the first time I remember doing it. I’d sit in the middle, and it was a big stick shift – I would do the stick. I couldn’t even see over the dash, obviously. And we were just doing all these hill climbs, and we’d find like hidden streams and go fishing and then get back in and go home. It was awesome.”

She knows her stuff, but of course, not everyone realizes that immediately. “Many people think my operations manager is the owner, which he’s not, or that we’re married, which we’re not. It was difficult in the beginning, but now we’ve had some longevity here. People read our reviews, and they mention my name a lot.”

Sarah does get groups of ladies adventuring from time to time including some bachelorette parties. In fact, she sees women breaking stereotypes all the time.

“I just had these ladies – they were almost 80 years old, and they were going out by themselves. They rented a RZR. I switched them into a Trail S, and they had a blast. I think they were going to come back this weekend. They stayed out for 4 hours. And next time, they want to do the full day.”

Those who are hesitant, and who are saying that familiar refrain, she encourages to give it a shot. “Women come in with their husbands, and they’re like, ‘No, I’m not going to drive at all.’ And I’m like, well, how about I give you some hair ties? I’ll braid your hair – you got to try it.” 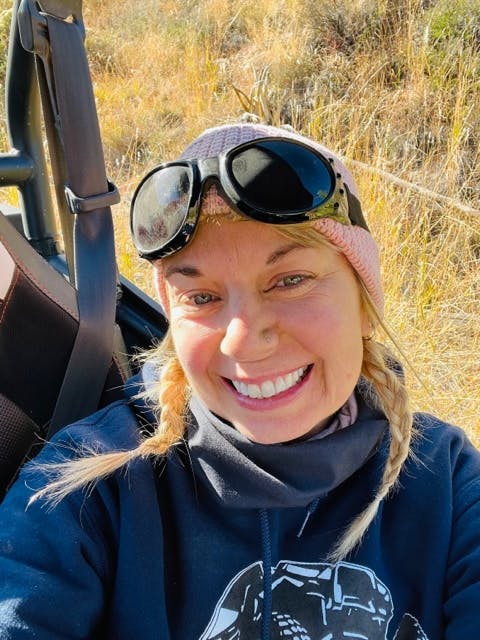